Stand Up And Sing! 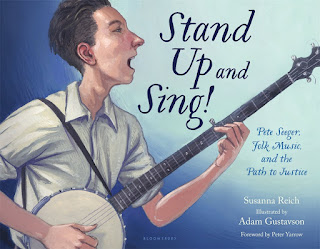 Stand Up And Sing! is my latest collaboration with author Susanna Reich. It's the story of folk singer, activist, environmentalist, and erstwhile shipbuilder Pete Seeger, from his birth in 1919 to his passing in 2014, complete with forays into the labor movement, McCarthyism, the Civil Rights era, and the founding of the Clearwater organization.

Publisher's Weekly just had these kind words to say about it:

Reich and Gustavson, who previously collaborated on Fab Four Friends, deliver a rich portrait of musician and activist Pete Seeger, focusing on how his deeply held convictions galvanized his music. Gustavson’s mixed-media illustrations highlight Seeger’s modest upbringing and down-to-earth persona, pairing lushly illustrated scenes of him traveling and performing with rough, loose sketches of unemployed men lined up for free food during the Great Depression, a couch where Seeger rested while on tour, and soldiers wading through a river in Vietnam (Seeger was outraged when one of his protest songs, “Waist Deep in the Big Muddy,” was cut from a television appearance). It’s an intimate look at a pivotal American figure who saw himself, as Reich notes, as a link in “a chain in which music and social responsibility are intertwined.” Ages 6–9. Author’s agent: Edward Necarsulmer IV, Dunow, Carlson & Lerner. Illustrator’s agent: Abigail Samoun, Red Fox Literary. (Mar.)

The artwork for the book takes a couple directions, medium-wise. I wanted the backgrounds to have a texture reminiscent of a calfskin banjo head, something accomplished with thinned down oil paint on prepared paper and a lot of trial and error.

The full color art is painted in gouache, but I wanted the spot art to have a sense of immediacy, functioning as little passing details to land on through the storytelling, but not things to be lingered on much. Pete's life story is rich in experiences, and the varied visual approach is an attempt to fit as much in as possible, while helping to prioritize and elevate some details above others. It also serves to provide a rhythm to the narrative, something that can be a challenge in nonfiction (life events don't care if they happen in a convenient story arc, and sometimes need to be coaxed a bit).

Nailing down a consistent likeness for a protagonist who ages 90+ years in the course of a tale is in itself a very specific challenge. My previous book with Susan, Fab Four Friends, had similar challenges, and getting things to feel right without giving the art a stiff or self-conscious quality is a real balancing act. In both books, the characters, period details of their surroundings, and their relationships to their specific instruments through the years all had to be delicately shoehorned into compositions that first and foremost served the story, hopefully stripping away some mystique from cultural icons in service of empathy. 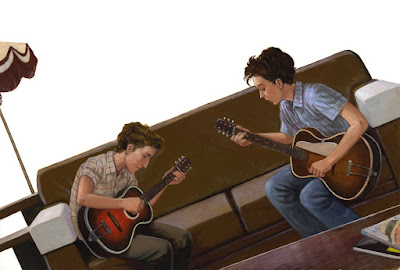 (And while some instances of reference hunting reveal precise details, like the color of the anti-macassars on Paul's mom's couch here, other elements are informed by odd tidbits of outside knowledge, like the fugitive quality of red dye used in cheap guitars from the fifties, which makes them appear more neutral or greenish in their present form.)

Posted by adamgustavson at 10:59 AM 2 comments: