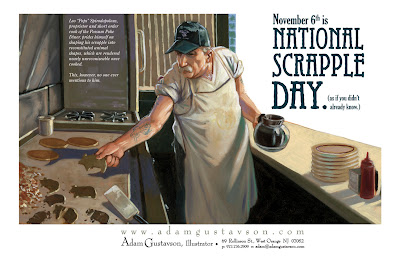 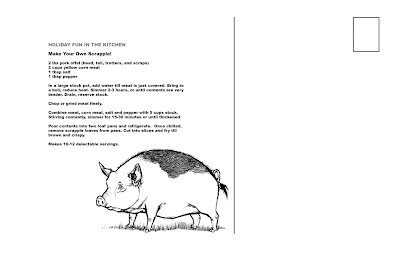 
"Leo 'Pops' Spirodopolous, proprietor and short order cook of the Possum Poke Diner, prides himself on shaping his scrapple into reconstituted animal shapes, which are rendered nearly unrecognizable once cooked. This, however, no one ever mentions to him."

For those of you too far west to have enjoyed this mid-Atlantic treat, scrapple is a yummy gray loaf of finely ground, boiled pork scraps mixed with cornmeal, salt, and pepper. It is best served sliced and fried, and tastes like, well, scrapple. Not sausage, not bacon, not even chicken, but its own unique oeuvre of olfactory stimulation, an achievement not often attained by offal-based processed breakfast side orders. While not quite a delicacy, this oft-maligned regional artery stopper is lauded fervently by its many flanneled defenders, and its mention in even passing conversation is met consistently with fanatical praise or unbridled nose-crinkling disgust.

Even among its supporters, the dish is frequently described as an acquired taste. The chilly Saturday morning my dad first tried to acquaint his young children with it, none of us could be sure what to make of it, for its texture and flavor defied even our most imaginative expectations. It should be noted, too, that in spite of its seeming malleability, it does not take well to being modeled into cool shapes before frying, and believe me, we tried.
Posted by Adam at 10:09 AM

Great painting! But I have to say, the poor piggie don't look too happy about this national day of Scrapple.

I can't recall having scrapple, even though I lived out East for about 8 years...

You did a wonderful job I really love this mailer! And I am sure it will bring you lots and lots or work. I love the pig he is soo cute!

Yeah, there's not a lot of redneck food that thrills the porcine community...

I'm enjoying your blog. In two more minutes I have to scoot out the door and pick the kids up from afterschool, but for now...

I have fond memories of scrapple. Don't get me wrong, I never want to eat it again, but it takes me right back to the Holms' table in my hometown of Cincinnati, Ohio, just by hearing it mentioned. We used to get it from Findley Market downtown, which is also where you could get fresh head cheese, pickled or fresh pigs' and chicken feet, beef tongue, and other inedibles. It was always a fun, if ghoulish trip.