I'm currently working a series of illustrations for a mystery magazine called the Strand Magazine, which is publishing in serialized form a lost manuscript by the writer Graham Greene.

This isn't the first serialized novel I've illustrated; in 2000, I worked with The Oxford American magazine, illustrating the debut of John Grisham's A Painted House. 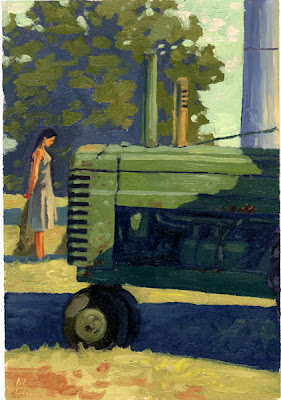 The Grisham job was full of interesting adventures from an illustration standpoint; each bimonthly issue contained between 4 and 6 oil paintings; each story installment rolled through my fax machine on an indeterminable Thursday night. Pencil sketches were due via fax the following day, and the paintings had to be dry enough to FedEx out on Monday, directly to the service bureau/printhouse doing the scanning so the magazine could go to press on Tuesday. Never quite knowing when the job would come in, I finished a few of them on vacations, once even sending the art out from a local upstate NY realtor's office, as they were the only scheduled FedEx pickup in town.

My initial offer to work for the Strand bore some semblance to this experience, actually. The initial email (oh, 2000, with your quaint fax toner ribbons and extra phone lines...) offered up two days for final art, no sketch required. It's a murder mystery, which obviously means I can't tell you anything that happens, except that for the sake of this post it takes place in an English estate around 1926, and includes an aging police detective and a houseful of deceptive, suspicious and temperamental Edwardians.

So with two days to draw, paint, dry, and scan, here's the detective in the dining room with the murder weapon. (I should probably take this moment to state that there is in fact no retired military man bearing a condiment for his surname, nor is anyone done in in the study with a candlestick.) 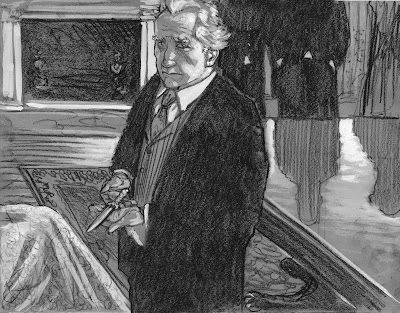 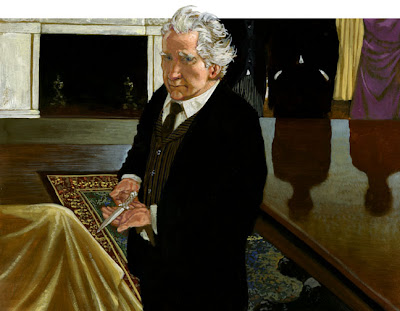 About two weeks ago, while in Savannah researching an different book project, I received another email, containing the next installment, this time with a week's deadline to produce a painting under. I spent most of that week with flu-like symptoms in a fetal crouch of self-pity and sinus mutiny, but pulled this one out in the end, with the help of a fast drying acrylic underpainting... 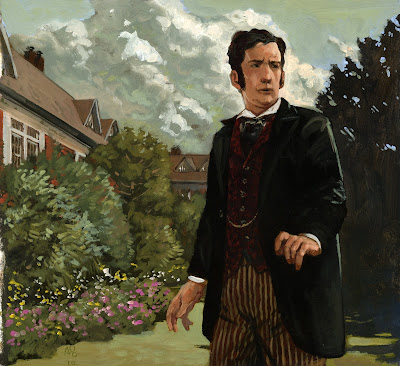 ...only to discover that that particular scene will be fleshed out in the October installment. I'm still not telling you what happens, but apparently in between these two pieces, something like this happens with yet another English gentleman... 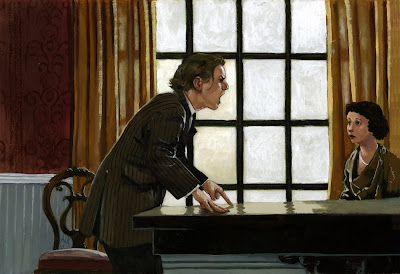 ...who left a few dots of fresh white paint on my scanner bed.

The downside to super quick deadlines, really, is that they require a particular reliance on "chops," an the creative decisions made in them often have much to do with what someone like me is confident they can pull off in a pinch. So that said, there aren't a ton of surprises, no greenish skin tones or odd violet shadows spilling in from nowhere. The end result is fine, but the nuanced creativity in a painting—beyond concept and composition, which all need to work out pretty quickly too—often is the unpredictable stuff that happens in the third coat of paint, and sometimes, after all the wham-bam-thank-you- ma'am-er-google period research and figure studies, there just isn't time for one of those.
Posted by Adam at 11:01 AM

it is really fantastik

enjoying your paint and it feels like going back home. good art

love it for sure!
br,
https://www.cekaja.com/info/mengenal-inklusi-keuangan-pengertian-manfaat-dan-inovasinya-untuk-negara/