It's an unofficial tradition at the University of the Arts in Philly to give sophomore illustration majors an "Old Masters" assignment, asking students to reinterpret a great work of art from antiquity, and to render it as close to the size of the original as possible.

Some highlights from my class this semester involved recasting Caravaggio's version of the "Judith beheading Holofernes" as a mural sized involuntary beard shaving, and Goya's "the Third of May, 1808" as a wet t-shirt contest. For my demonstration, I completely cheated, as is my prerogative as an instructor, and chose a small piece by Vermeer involving only one figure, "The Milkmaid." In my defense, though, it's a Vermeer, and no cheap impersonation or homage is ever as good as a Vermeer. Aside from the comparison it begs to its untouchable Dutch predecessor, I also think I lost a little of my young lady's quirkiness, present in the sketch, as I rushed through the oil painting. Character can be such a delicate issue; a few dabs of the right color wrong places, and the species and gender remain, but, nope, not the character.


But anyway, here's she is. The whole thing was handled in what I like to think of as the Julia Child method, where one starts a preliminary step, proceeds halfway through, then pulls out a earlier version to complete. In this case, there was a subdued "local color" underpainting in place, and the demo proceeding in two steps, the first of which was to lay down a thin glaze of sap green and burnt sienna over the whole thing, unifying the temperature throughout. The second step that proceeded involved about an hour of scumbling and building up lit surfaces in the composition, exploring chromatic changes that occur with the varying of paint's opacity when applied in successive layers.

Sounds pretty highfalutin, if you ask me. 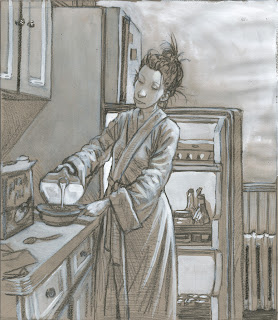 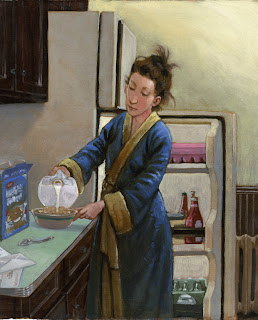