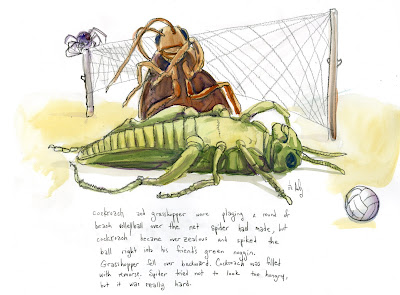 Cockroach and Grasshopper were playing a round of beach volleyball over the net Spider had made, but Cockroach became overzealous and spiked the ball right into his friend's green noggin. Grasshopper fell over backward. Cockroach was filled with remorse. Spider tried not to look too hungry, but it was really hard.

My sons and I have been painting at the dining room table; bugs mostly, with the occasional dragon thrown in. This was my contribution. Theirs are likely much cooler, so I'll be posting them a little later.

These are great, but yah, kids' drawings are always way cooler. Nothing one can do--Just gotta deal! Awesome stuff! Keep it coming!