I was young. I needed the money. 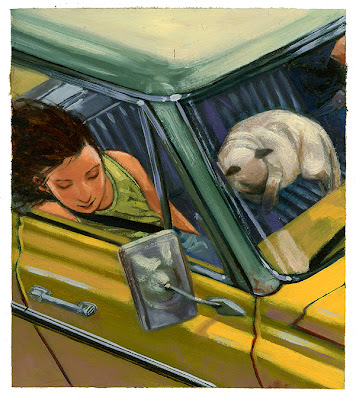 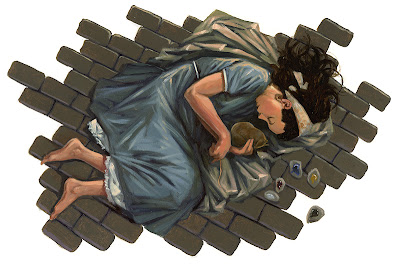 I wasn't all that young, come to think of it.

And it might not have been that much money.

These are two pieces commissioned for completely different stories in Cricket Magazine, in 2004 and 2005 respectively. I was kind of fond of them at the time, and the stories were enjoyable to work on.

The second one came about as a bit of an oddity. A different illustrator had been commissioned to illustrate parts 1, 2 and 3 of a serialized fantasy piece, and for some reason didn't complete the fourth chapter. I was called on to finish out the series, staying as close as possible to the original characterizations, one of whom I now see looks serendipitously like the girl in the pickup truck from 2004.

Apparently this poor young actress is floating about in the ether, picking up whatever gigs she can. She's probably pushing 30, still taking on teen angst roles and toothpaste ads, waiting for her big break. I'm now wondering if I've used her elsewhere.

Maybe I made her the pregnant daughter of an Arkansas sharecropper.

Or maybe I sketched her out as an emotionally scarred college freshman, raised in a trailer park and plagued by generalized anxiety and a fear of canines? I'll check my flat file, but I'd bet that was her.

I hope she's doing okay. I've been mostly dealing in juvenile fiction now, picture books and educational bread-and-butter stuff. If she can hang on a little longer, just spend one more year eating Ramen and tending bar in dimly lit Tiki lounges, maybe I can start casting her in some of the Mom roles that crop up.

Yeah, Mom roles. No big break on the horizon, no center stage mass market appeal—still fighting over contracts and escalation clauses, all the while knowing she can't just walk out of any negotiation. But still, something to keep the landlords and meter readers at bay. Maybe buy a new coffee maker, maybe some furniture that doesn't fold up or inflate.

I just hope she can hang out that long.
Posted by Adam at 2:11 PM