Three of a kind. 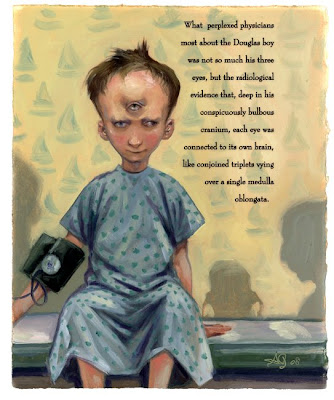 The Douglas Boy.
2008, oil on paper, 9.5" x 12" .
My latest contribution to the "Drawer Geeks" club. The theme this time around was "triplets," implying anything coming in a set of three.

My wife gave me a long, strange look after I finished it.

I still haven't figured out how the three brains work together or against each other, but I'll let you know if I do. Right now, I figure that our young man has mostly monocular vision, like having a lazy eye, but that periodically the role of vision shifts from one brain to another, and with it goes control of his body and will. The blue eye is probably right handed, the brown one left handed, and the green ambidextrous, though I'd imagine it also represents his more sociopathic self.

He has a lot of cowlicks, and his left-eye cerebellum was slow to potty train.
Posted by Adam at 7:14 AM

Hmmm. Oddly satisfying. This was the post that made me add you to my links!

YES! Suddenly I am flashing back to an old kids series on Nickelodeon called "The Third Eye" complete with trademark BAD 80's sci-fi tv show effects so bad they are scary. Am I making that up? Anyway, killer illustration!