Hope you all celebrated in kind. 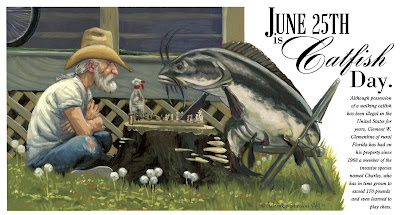 Although possession of a walking catfish has been illegal in the United States for years, Clement W. Clementine of rural Florida has had on his property since 1968 a member of the species named Charles, who has in time grown to exceed 170 pounds and even learned to play chess.

For those of you who commonly receive these in the mail and mumble to yourselves, "uh, what?", I give you this snap shot into the engineer's seat of my train of thought. I'd call it my conceptual problem solving technique, but that really might be stretching it.

First off, yesterday really was Catfish Day. (I have my sources.)

Near dams in North America, catfish the size of late 70's Hondas have been reported and sometimes even photographed; being bottom feeding scavenger types of indiscriminate palate, they munch away idly at anything that collects there, which pretty much encompasses everything that flows downstream.

I looked them up. They are an invasive species from Southeast Asia, and very resilient. Their "walking" basically entails flopping from stagnant pool to stagnant pool, aided by lungs in addition to gills, a handy hybrid breathing feature.

So that's kind of irresistible. Combine the two and you get a 170 pound walking catfish. Of course, to really get the scale visually, one needs a frame of reference. A bike or car won't do; then he'd be, like, a driving catfish (though that contradiction too is tempting). He'll need a person. For some sort of dichotomy to remain intact, though, the picture is going to require a sense of companionship and sympathy, someone who would give a giant alien bottom feeder the benefit of the doubt.

I was originally figuring this would be a child. Children don't always give each other the benefit of the doubt, but a big ugly misunderstood animal could gain trust and protection pretty quickly. E.T. lucked out more than a little bit by cavorting with juveniles. But the big walking catfish just looked too ominous for a postcard; to really get the camaraderie would have required more than a cursory glance. Yup, once Frankenstein threw the little girl in the well, it got harder to pull this sort of thing off.

But it has been illegal to own one in the US for a number of years; though I couldn't find a consistent date for the legislation, this got me thinking, since their appearance does date to about 1968. That brought me to Clement W. Clementine here, and his first tour in 'Nam when he smuggled home a small, slimy souvenir of his traumatic tropical ordeal. He moved as far from civilization as he could bear to after the war, living in small shotgun style house in the Florida panhandle, blithely sticking it to the man through a blend of earthy hippie independence and libertarian stubbornness, living off the land and selling pirated copies of "Easy Rider" over the Internet.

The catfish, who was named Charles after Victor Charlie, the Viet Cong archetype, has lived on this wild, sprawling property since the war years, and will engage in a game of chess every now and then, provided Clement spritzes him with an atomizer periodically, keeping him moist.

Charles is, perhaps needless to say, a terrible chess player, and Clement whups his butt at it regularly.
Posted by Adam at 9:39 AM

Great paintin'.... I'd say the Gar fish is the one that really needs a day of recognition.

Those fish are really scary looking. They can get to be really big too... and once you hook one, it might ge an hour afore you git it out.

I used to catch them down in the Blue River in Manhattan, Kansas. They swim up from the Mississippi.

This is fantastic. The squirt bottle (or "atomizer" for you fancy-talkers) is genius.

I just looked up the gar fish, John, and wowholytoledo. I need a couple refills of xanax if I'm ever going to get to sleep again.

Ha! This illustration is just awesome. The expressions are spot-on, every detail is there, right down to the posturing. Love it!

Cain't quite tell where the leg pullin' starts in this story, but its all good and I love the art!

Whoa! I'm impressed by your in-depth research of walking catfish! I am dying to know the interesting tidbits you uncovered while researching Scrapple day! (actually, on second thought, I'd like to keep eating scrapple, so maybe I don't want to hear the details).

I spent many formative years in Florida, & my parents recently sent a terrifying You Tube video of an alligator invading someone's kitchen in a nearby neighborhood. I hope they won't be plagued by walking catfish now, too.

I like his sticktoittiveness. For a fish out of water, it's quite impressive.

The scrapple research was for more chilling. And it really does fall apart if you try to reconstitute little animal shapes out of it before frying.